This paper discusses about the optimized approach in Image detection tasks and compares it with other detection models such as YOLOv3, MaskRCNN and many more by building a scalable detection architecture.

It proposes a weighted Bi-directional feature pyramid network (BiFPN), which allows easy and fast multi-scale feature fusion. Secondly a compound scaling method that uniformly scales the resolution, depth, and width for all backbone, feature network, and box/class prediction networks at the same time.

When there are different input features are at different resolutions, we observe they usually contribute to the fused output feature unequally. To address this issue, the paper proposes a simple and effective weighted bi-directional feature pyramid network (BiFPN), which introduces learnable weights to learn the importance of different input features, while repeatedly applying top-down and bottom-up multi-scale feature fusion.

A compound scaling method for object detectors, which jointly scales up the resolution/depth/width for all backbone, feature network, box/class prediction network. 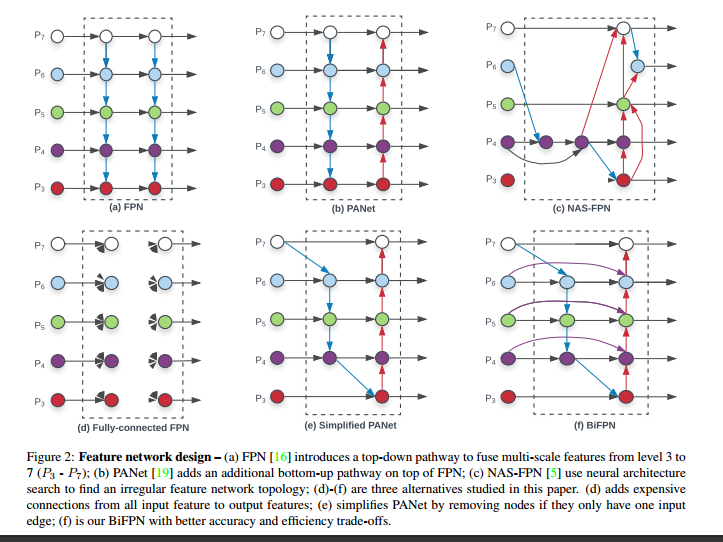 Conventional top-down FPN is inherently limited by the one-way information flow. This paper proposes three improvement for PANet, since it performs at a better accuracy than FPN and NAS-FPN but with the cost of more parameters and computations. 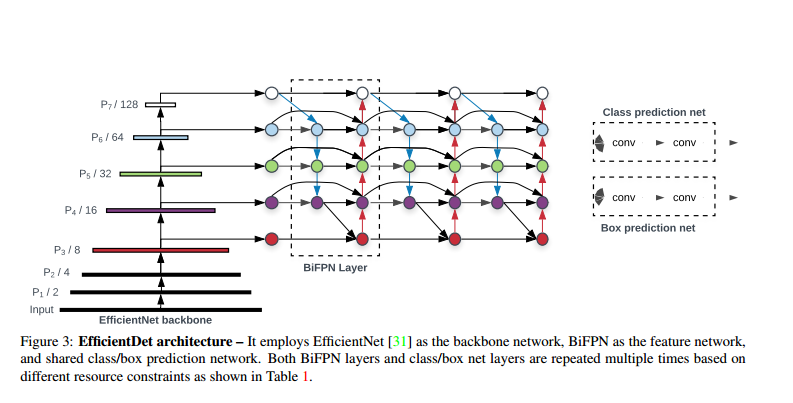 The paper employs ImageNet pretrained EfficientNets as the backbone network. The proposed BiFPN serves as the feature network, which takes level 3-7 features {P3, P4, P5, P6, P7} from the backbone network and repeatedly applies top-down and bottom-up bidirectional feature fusion. These fused features are fed to a class and box network to produce object class and bounding box predictions respectively.

The paper proposes a new compound scaling method for object detection, which uses a simple compound coefficient φ to jointly scale up all dimensions of backbone network, BiFPN network, class/box network, and resolution.

The paper reused the same width/depth scaling coefficients of EfficientNet-B0 to B6, such that they could easily reuse their ImageNet pretrained checkpoints.

The paper has exponentially grown BiFPN width (#channels) but linearly increase depth (#layers). Since depth needs to be rounded to small integers.

The width was always the same as BiFPN, but linearly increase the depth (#layers).

Since feature level 3-7 are used in BiFPN, the input resolution must be dividable by 2^7 = 128, so they linearly increased resolutions. 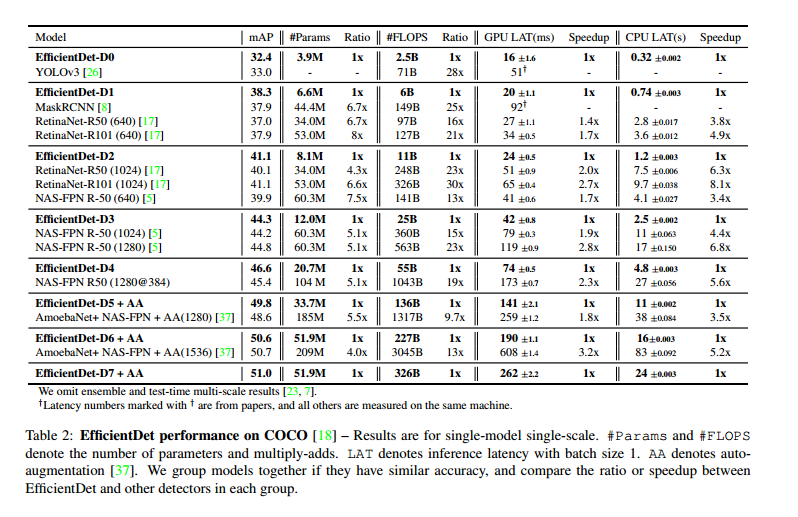